What a blur this past weekend turned out to be. Normally, we arrive 2 days ahead of time to get settled in before the festivities. This race however, due to busy work schedules, we arrived in Grove City PA late Friday afternoon for the Saturday morning 50K. Cyrus, me, Swiss and Phantom were all sitting in the lobby when who drives in but the Captain! He has been nursing a broken foot all spring, and I certainly mostly wasn't expecting him in Pennsylvania because he said he wasn't coming. I'm not sure this beats his getting out of the hospital bed to run the Vulture Bait 50K last year, but the guy's a warrior.
So after we all faked shock at the Captain's arrival (hah, we're starting to expect it ) the boys immediately headed south to Butler PA, to scout the route where the inaugural Glacier Ridge 50K was being held. We kinda got lost 3 or 4 times on the way, Not Good. When we finally arrived,we picked up our race kits and checked out the prize table (just in case).
While we were listening to the pre-race speech, the girls were inflicting the first damages on the Visa cards at the  world famous Grove City Outlet Mall. This is where the "Expensive" part comes into the trip.
We got back to the hotel (after getting a bit lost again) around 7:00 p.m. and all headed out to dinner at the "Elephant & Castle", a well known chain of English style pubs. We just call it the E&C. Since I had already had my traditional Applebee's  burger for lunch (along with a Blue Moon beer from Colorado), I went for the fish and chips and a couple of Yuenglings for dinner. This Yuengling is some seriously good stuff from America's first brewery, 178 years old and counting.Only in Pennsylvania you say? Pity.


After dinner I stopped at a convenience store for some hotel beer, and thus began my ordeal with some of the weirdest beer buying laws I've ever encountered. They didn't have any beer (or wine) at the store, so I just figured just I'd pick some up after the race the next day. Hah!
More on the story of "The Beer Hunter" later.
But first, the race report.
We made it back to Butler the next morning without incident and were pleased to note it wasn't pouring rain like it had been all week (we had been keeping track of the weather). The ground was soaked and the race looked to be a major mud-fest. Onions had been staying with friends in Pittsburgh and showed up in the nic-o'-time.  The six battle ready pylons took the ceremonial group shot seconds before the gun went off.
We stayed together for the first 10 seconds or so, then Cyrus and Onions dropped us. Phantom and I ran together and Swiss and Captain fell back a bit. The course was very hilly and very muddy. Unlike our Toronto mud (wet clay) this mud didn't build up on the bottom of our shoes, so we had that going for us, which is nice. We made the first aid station (4.7 miles) in 48 minutes, right on schedule for a 5 hour 50K.Sweet.


We felt strong. Looking back, that was a mistake. Long story short, the course got muddier and steeper as we went. What I had hoped would be a training run for my first 50 miler the next weekend soon turned into a serious challenge. Like Phantom said, the wheels weren't falling off, but they were starting to wobble a bit.

Around this point we passed Onions, he looked done. By the time we hit the 4th aid station at around the 21 mile mark, we were still looking at a 5:45 50K.Good.

When we hit the last aid station with a bit less than 5 miles to go, I was remembering we did this section in 48 minutes at the start of the race, and still thought it possible to bring it home in under 6 hours.

My quads were now ablaze and  threatening to lock up on every descent. But I wanted that sub-6:00 and just tried to keep putting one foot in front of the other as quickly as possible.

Phantom fell off the pace a bit after the last aid station, and Bryan L had dropped me, so now I was running alone. I kept hoping for another uphill so I would have an excuse to start walking. The 48 minutes passed, then an hour. I remember feeling elation when I finally emerged from the woods onto the path to finish. I put the hammer down! Chug-a-lug, Chug-a-lug, Chug-a-lug, using my mantra.   After about 5 minutes of having the hammer down, I realized I had once again been premature and wasn't quite as near the finish line as I thought. Doh. Now my legs are really wobbling and starting to send my brain messages that a cramp is coming very soon if this foolishness doesn't stop NOW.
But I decided to take my chances and kept running, albeit comically slowly I'm sure. I somehow managed to pass someone on the last hill, unsure if they were a 30K, 50K, or 50 mile runner. At that point, I didn't care. The same 4.7 mile section that Phantom and I did in 48 minutes at the start of the race wound up taking 1:10+ at the end. Funny how there are more rocks, deeper mud and sneakier roots on the "back" part of an "out and back" course.
And then, suddenly, there it was. Off to my left. The finish line. Why was I still running  straight ahead? I had to stop, pivot left and head for the line. I got this cool shot, to much laughter.
I love bringing the camera, it maybe cost me 30 seconds of time over a 50k, but what great memories. Cyrus had finished 15 minutes ahead of me, and was nowhere in sight. I went to sit down, but my legs wouldn't bend, so I just walked around waiting for Phantom so I could get a shot of him finishing.


So while we're congratulating each other and comparing war stories, who comes around the corner but Onions! Once again, he has risen from the dead to finish strong. He did the same thing at Bel Monte.Amazing. If only we could get him to train.

Half an hour later, Captain finishes off, followed by Swiss, who winds up being the oldest finisher, as well as taking to 60+ category. 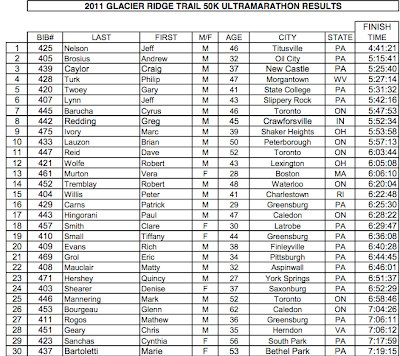 As you can see, a fine showing by the Canucks. The guy who beat me in the 50+ category,Brian Lauzon, is a friend of ours from Peterborough Ontario, so good for him. Although not a member of the Fat Ass Pylons, we seem to run into him at a lot of races.

The course was amazing,and the whole thing was very well organized. Onions had a complaint for the RD, he told him"There were 2 dry spots out there,what's up with that?". The RD promised he would hose those areas down in future races. We all agreed it was much tougher than we expected, and the hardest trail run we've done other than Bel Monte in Virginia and Escarpment in the Catskills. My only criticism is that there was no podium, I didn't get to wear my podium shoes! Doh.
Oh yeah, about those beer laws in "The Keystone State". I just wanted to pick up a case of Yueng Ling for me, and 2 six-packs of Sam Adams for Phantom. So after the run, I go to another larger grocery store to buy beer. No beer visible anywhere. So I have a chat with the cashier.
"I'm from out of town, I've just run 50K through mud. Can you tell me where I can buy some beer"?
She says"Six pack or Case"?
"I want a case of  24 Yuengling and 2 six-packs of Sam Adams".
Simple enough.
"Well, you can buy the six packs at a bar, but you can only have one. You need to take someone with you if you want two. For the case of beer, you have to go to out of town about 2 miles to Irish House Road. Turn left. Drive right to the end. There is a place there that will sell you a case."
I have $40 on me and no wallet, since I just finished a 50K in the mud and Portage has my stuff, and she's putting in overtime at the mall. I head out to Irish House road, turn left and drive to the end. There is a store/barn there, that says they sell beer! I go in and ask for a 24 of Yuengling and 2 six-packs of Sam Adams.
"We don't sell six-packs, you have to get them from a bar, but you can only have one."
And since a 24 of Sam Adams is $33.00, I didn't have enough money for two. Doh.Sorry Phantom, a case of Yueng Ling it is. And I'm too thirsty to stop at a bar for a six-pack!

Finally we get settled back at the hotel, and I chug a couple. Nice guy that I am, I share with Phantom. Bob Fargo, the RD, had mentioned to us about a great Brew Pub in Slippery Rock (North Country Brewing) that we should go for dinner. Unfortunately, no one felt like driving, so again the 12 of us headed across the road for another dinner at E & C, I ordered their "Luxe Burger" and it is 8oz. of sirloin heaven. I rate it a tie for best burger(with the Hard Rock Cafe in Las Vegas) ever.Thick English fries. Unbelievable. It is so good, I had another one for lunch the next day before we headed back to Canada.

The Digger Family got nailed at the border for extra duty, but I think when you've got the car so full of stuff the customs officer can't see in the side or back windows, that will happen. I got my case of Yuengling home safely and also picked up some fine single malt Scotch for "The Boy".
This was a really fun trip, the "Better Halves" and "The Girl" enjoyed themselves immensely. I'm sure there will be great pressure applied to do this race again next year.
I don't see a problem with that.