The Pylons had a great turnout for the Vulture Bait 50K this weekend, with 8 members in attendance.VB 50K is two scenic 25k laps around a lake.
Captain booked a nice hotel for himself, me, Cyrus, Beaver and Meanie. Phantom,Swiss and Sub all drove in from various locations the morning of the race. First things first, the pre-race "carb  loading" i.e.: beer & French fries.

I actually thought we were in a Montana's Steak House and didn't notice until we left it was "Crabby Joe's" DOH. Anyway, they had all the staples, beer, burgers and fries. 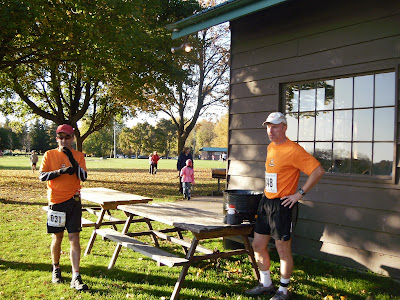 Beaver and Captain get their game faces on. It's no less than a miracle Captain is here, I picked him up at emergency last week after an ambulance took him to the hospital earlier in the day. It turned out to be a virus that got into his inner ear and affected his balance. Knocked him on his back for 4 days, he was thinking of just volunteering at VB, then decided to at least try the 25k, and if he felt good enough, maybe the 2nd loop for the 50K.I would have put the odds against at 90%.

So Vulture Bait was supposed to be a training run for the Bobcat Trail Marathon in 3 weeks, I think everyone took it easy on the first lap.


So, as Phantom,Captain and me are doing our first lap, a photographer yells at us"Hey Pylons, another Pylon says to tell you he is CRUSHING the course!"Later, a second photographer says "Hey, your buddy said to tell you he is KILLING the course". We take .00007 seconds to guess it is this guy, Sub. Vulture Bait is his comeback to trail racing after a forced 2 1/2 year absence due to multiple(8-9) concussions caused by bike crashes, head shots from low tree branches and hockey hits. Great job on the 25K for the former Ontario Trail Series Champ, who ran under an alias in an age group he doesn't belong in. 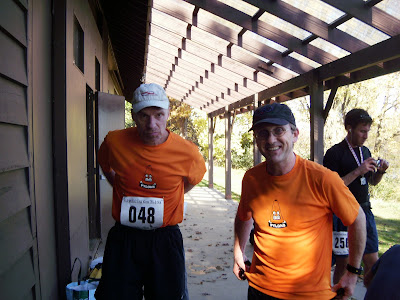 Phantom and I had to kinda, sorta had to talk the Captain into doing the second 25K loop.I think he said something like "OK boys, talk me into finishing this".
As you can see here, he had the "Eye of the Tiger" by the time we were done with him, and miraculously completed the 50K. I believe we may also have said we would stick with him on the 2nd loop, which we did for the first 10 yards or so.
Geez, I almost forgot the race report.We all toed the line together (except Meanie,naturally) near the middle of the pack, apparently someone said "Go" and the runners shuffled forward, except for Sub and Beaver who took off like rockets. I think Sub may have been recalling his "Dances With Dirt" days and bowled over a few of the slower folks. Hey, they shouldn't be starting near the front if they're slow.
Captain,Phantom and I stuck together, just taking it easy, cruising along. We were surprised to catch up to Cyrus around the 5K mark. He was really taking it easy, and still had his jacket on, even though we were all sweating like crazy. After listening to us trash talk him for a kilometer or two because he was hanging back with us, Cy got bored and took off, not to be seen again until after he had showered and eaten and met us at the finish line.
Vulture Bait 50K is a very scenic and fast 25K double loop course, but like Captain says, the hills get steeper and there are more roots and rocks on the 2nd loop. The RD says only a moron could get lost on this course, and amazingly, this was the first year I didn't get lost. That may also be because I ran the first 45K with Phantom. We would run together, but when we came to an aid station, due to my triathlon training, I would grab a drink on the fly and go, while Phantom would stop and chat with the volunteers. He would then catch up and the same thing would happen at the next aid station.
Anyhow, as I have often said, the Fat Ass Pylons are dangerously close to becoming a good running club. The four of us who weren't in the hospital last week finished the 50K in under 5 hours. A 50K PB for me in 4:56. I also accomplished my goals of going sub-5:00 and running a negative split with a 2:30 first loop, 2:26 second loop.
Great start for Sub's comeback, no doubt he'll be gunning for the top spot on the Pylon Totem Pole.
Solid run by our senior member, Swiss. And I hear Dora's broken toe has healed and she'll be hittin' the trails asap.Everyone's looking forward to going to Ohio.

So it's onto the Bobcat Trail Marathon in 3 weeks, the last rodeo of the year. It's in the middle of nowhere, Ohio, what could go wrong? The Wolverines have embarrassed me so much these last few games, I have abandoned my plans of wearing all Michigan clothes for the race. I still have Tennessee,Connecticut and Indiana clothing to choose from.Too bad, they really hate Michiganites in Ohio, it would have been fun, maybe.
Posted by Digger at 2:10 PM