Firstly, the Pylons are coming for a twilight trail run here at Chez Reid tomorrow. I  won't participate in the run,as a twisted ankle would mean about $3,000 down the drain! I will however, participate in the food eating/beer drinking portion of the evening.
Secondly, Mrs. Digger and I leave for Penticton,British Columbia in three days for My First Ironman, and I am as ready as I'll ever be. The kids are flying from their Grandparents in Nanaimo on Vancouver Island on Friday to hook up with us.
No injuries to report other than a chronically sore achillies, which I have under control. I'm doing an hour tempo run on the road today and an hour of swim drills tomorrow.My bike is already on it's way westward, so no more riding until Thursday.
Thirdly, my Primal Chicken Wing Recipe got mentioned on "Mark's Daily Apple"(The blog that started me on my Primal Journey). Mark's is probably the most popular Primal Living Blog out there in the Blogosphere. All of a sudden, I have a bunch of new readers! One of these days I'll have to send in my before and after success story to him, but I will have a tough time finding any bathing suit pictures of me at 216lbs.
I'll try to keep it interesting.
Packing for Ironman Begins 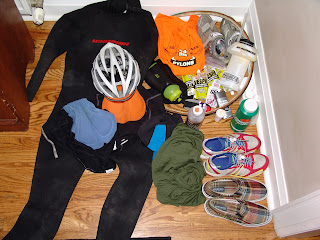 P.S.-Good luck to Dora, a fellow FAP who is competing in Trans-Rockies in Colorado all this week.
Posted by Digger at 11:27 AM