Well, it was Fat Ass Pylon Tuesday, so Beaver,Captain,Sub,Swiss,Onions and myself gathered for a run. Regrets from Pointer,Cyrus and Phantom,not sure if we will see Ladies Man or Moonshot for a few years due to lots of young kids, Dora's in Colorado at Trans-Rockies running with Dean Karnazez, I wounder if she'll get his autograph, I'm not sure if she's a fan. Check out his Blog here. No comment, other than it's not as good as Brownies.
I bailed on my own run at the last minute, Mrs. Portage( formerly: Mrs.Digger) reminded me of the substantial investment we have in Ironman, and one Oak tree root or pounding a toe into an immovable object could mess things up, so I had a few beers instead.Onions showed up about an hour late, so he decided to have a few beers with me instead of trying to catch up to the others. I think he is standing on the cooler in this shot. 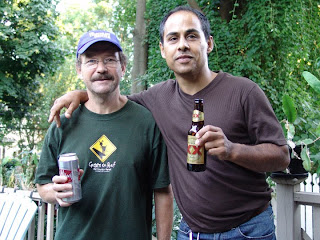 Speaking of Onions, he is a very economical runner, and I am going to have to concentrate on running like him at Ironman, not after I get tired, but right from the start. Onions once completed this 150k race in around 24 hours with hardly any training. So, whenever I am feeling tired on the trail, I concentrate on Running like Onions. With four young kids as well as building his own house, he's lucky he doesn't have to train like the rest of us.Reminds me of that Australian guy who had the poor VO2 max but held the marathon world record because his running was effortless.What the heck was his name?Doh.

Swiss raises the bar, and gets the shorts to match the podium shoes. Damn. 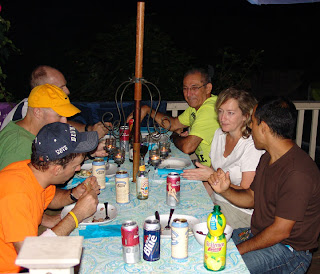 So Mrs. Digger decides to dine with the Pylons after their run.Not good.The left side of this photo has 13 Ironman finishes to their credit, Captain has completed 8,Sub 4, and Beaver just completed his first this year at Lake Placid. The stories they were telling last night were amazing. Captain and Sub began when Ironman was in it's infancy and they had co-ed change tents.No wonder the transitions took so long back then. Anyhow, Captain was trying to tell a story about the Battle of Waterloo Triathlon he just completed in Michigan, it involves a run, swim, bike,swim,run, bike, swim,run, or something along those lines and is self supported, meaning you have to carry your shoes during the swim to do the next run. Mrs. Portage(formerly Mrs Digger) had some questions and observations which made the story take a very long time which resulted in a new nickname.She blamed the whole episode on the fine bottle of Pinot Noir Sub provided her with. However, the nickname "Pointer "(blaming other people for your actions) is already taken, so............
Mrs. Digger is now Mrs. Portage, and has vowed never to eat with us again.

So, tomorrow morning,it's off to Penticton! I will try to update as much as possible.Thanks to the gang for all the advice.
Posted by Digger at 3:46 PM