There's nothing we like more around here than "Tuesday Half Price Wing Nights" at our favourite place, St. Louis Wings on Yonge Street. This year however, The Girl is playing soccer every Tuesday night, so it was time for me to drag out the deep fryer and make my own again. We used to do this all the time, but decided to leave it to the professionals for the last few years. So, since I've gone primal, I haven't made chicken wings.
It was pretty easy to convert my previous recipe from Neolithic to Primal.All I did was substitute lard for vegetable oil, and almond flour for white flour.Here's the recipe.
You need about 3 cups of lard (or coconut oil if you can afford it)

You are going to need 50-60 jumbo chicken wings ( about 5-6 lbs.) for a family of four. There's no problem with leftovers. Add the wings,10 at a time, to the bag with the flour/spices. Remember "Shake n' Bake"? That's all you do. Shake the wings inside the bag until completely coated. 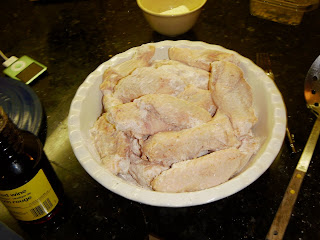 Heat 3 cups of lard or Coconut oil to medium high. Should be a good rolling boil. I like to pre-heat the wings ,10 at a time, for 2-3 minutes in the microwave so they don't cool the lard/oil off when you put them in.Be sure there is enough room in the pot(or deep fryer) so that when you add the wings there is no spillover of oil. Make certain to have the pot lid handy in case you have a boil over and the oil catches fire. That way you just put the lid on the pot to put the fire out.Make sure there's a phone nearby. Don't ask.
Add the 10 pre-heated wings to the oil and let them deep fry for a full 8 minutes.Don't take them out until they a golden brown. They won't be as good if you don't let them fry long enough to get crispy! 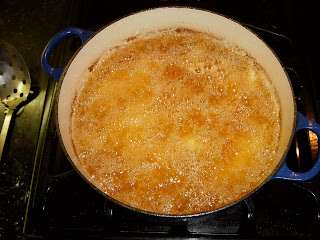 Part 3
On another element, use a large teflon frypan and melt 1/2 cup butter.Add a tablespoon of red wine vinegar and your favourite hot sauce to taste.This may take a bit of experimenting. Better to add too little rather than too much, you can always pour more on the cooked wings. These are our hot sauces of choice. 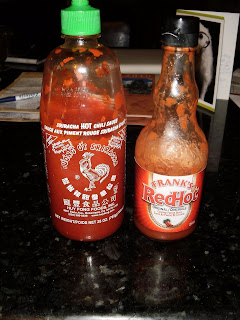 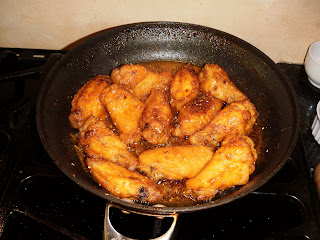 Put coated wings on a cookie sheet and put in 200˚F oven to keep warm while you do the same thing to the rest of the wings,assembly line style. 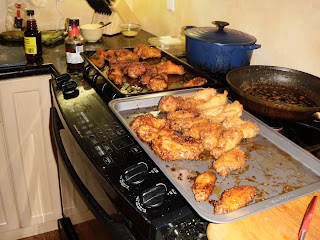 You also have the option of doing honey/garlic/sesame wings. These are done the same way as the hot wings, however instead of adding hot sauce to the butter/vinegar, add a teaspoon of garlic powder, a tablespoon of sesame seeds and honey to taste. I usually just squirt in about half a cup of honey to start. Again, you will have to experiment. We actually like to add a bit of hot sauce to the honey/garlic as well.The boys like the hot wings,the girls like the honey garlic.
Those are honey/garlic on the right, the hot on the left. Someones been sampling! Serve with carrot and celery sticks,with full fat blue cheese or ranch dressing for dipping. Renee's is a great primal dressing.
Now, I'm not saying these are suicide hot wings,but here's what I found the next morning............ 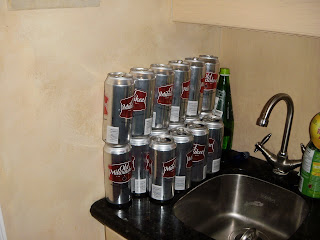