Race Reports, Finally! Women's Only and 12 Mile Creek Half Marathons.

First up was Portage's Woman's Only Half Marathon, her first. It was held in bea-utiful Taylor Creek Park on May 26th. Portage, Aunt Eleanor,Cousin Jamie and friend Robin were all running. Uncle Bob (Bob's Your Uncle!) dropped them off at the start, the kids and I arrived later to see the girls finish........ 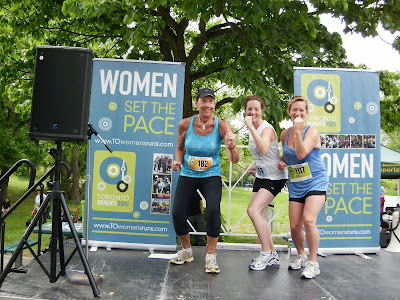 12 Mile Creek-June 2nd, 2012
Next up was the 12 Mile Creek Half Marathon in St. Catherines, my 1st race this year after knee pain in Feb-March-April and then rotator Cuff injuries in April-May. Sucks to be old! But seriously, I've got to start stretching and my physiotherapist has given me lots of exercises to do.
Usually, The Captain and me run this race together, unfortunately he was home sick. So my buddy Matt Wilson (brother of the Wilson Twins, Brad and Eddie) picked me up at 6:39 a.m. for the drive to St. Kitts. This was unusual, because Matt is usually right on time and he had said 6:41 for pick-up, which left me scrambling when he arrived a full two minutes early, and I forgot my wallet in the resulting kerfuffle. Oh well, off we headed, arriving a full hour before race start.


Even though I have run this race 7 times, I managed to get lost. How pathetic is that? In my defence, the course was pretty poorly marked at some crucial turns, and I wasn't the only veteran who ran some bonus distance.

So once Matt pulled away, I saw him at the beer aid station turnaround and figgered he was 4 minutes ahead. He is running well, I found out later that he has 49 marathons under his belt, and a PB here of 1:31. I passed at least 15 people in the 2nd half of the race, and maybe 3 people passed me. So, for the shape I'm in, I guess I paced myself properly.
Matt and me finished so quickly they didn't have the beer tent set up, so there was a bit of concern on my part. Not to worry.


One of the cool things about 12 Mile Creek is you get your name on the race shirt. The more times you have run it, the higher up on the list you move. 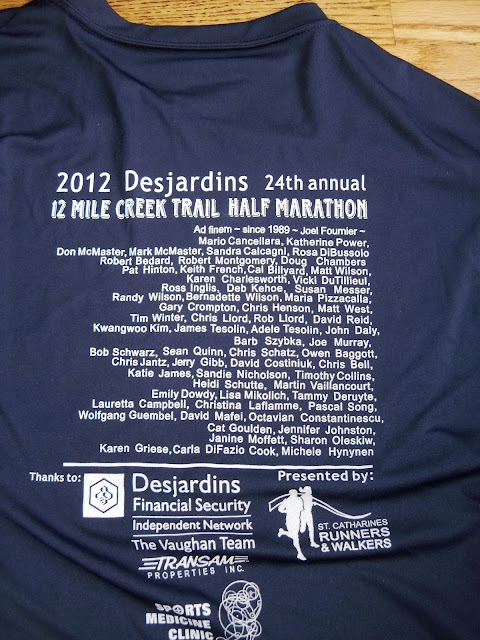 As you can see, Matt has run this race a lot. Didn't see John Daly out there. And Octavian Constantinescu? Sounds like someone made that name up.
So Matt hammered it in 1:49, I thought he would be in for a podium spot because he is only a week younger than me. This race is old school, no timing chips here. They have one guy at finish taking bib #'s off as you cross, another writing down the times. Then they go to a trailer and match them up and figure out the awards. Turns out Matt was 5th in the 50-54 category and I was 8th with a 1:55:56 . I slammed back 6 Great Lakes Blondes while we waited for the results, so it wasn't a complete loss.
Complete Results are HERE.
Anyhow, it's off to Paris Ontario for the Phlox 25K next weekend. It will be Portage's 1st 25K, and she will be joined by "The Boy" (10K) Captain (if he's feeling better), Cyrus, Swiss, me and possibly Phantom. We tried to talk Dora into joining us, but she apparently has some 70.5 mile race (happy?)  in Pennsylvania the day before and wimped out. Good Luck Dora, and we seriously have to get our schedules coordinated.
And finally, 4 years ago this weekend, the Pylons invaded UConn.