The Last Two Weeks Have Been Tuff, But Worth It. 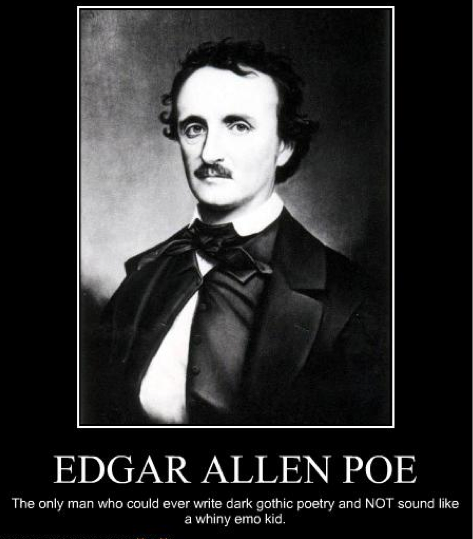 Fill with mingled cream and amber,
I will drain that glass again.
Such hilarious visions clamber
Through the chambers of my brain.
Quantist thoughts – queerest fancies,
Come to life and fade away:
What care I how time advances?
I am drinking ale today.
– Edgar Allan Poe
Edgar Allen Poe has always been my favourite author, and it's funny, he's one of "The Boy's" favourites too.

So, in the last 2 weeks, I ran 96 miles and had 0 (zero) beer. Also, cycled 3 hours. I also lost 10 lbs. That is kind of cooking the books though, I'm going from a post-cheat day weight of 176 lbs. to a pre-cheat weight today of 166lbs.  But I'll take it. Portage is down 8lbs. from our adventure in Utah/Arizona/Nevada in November, but she doesn't have as far to go as me.
Without question, the greatest invention in the history of mankind is beer. Oh, I grant you that the wheel was also a fine invention, but the wheel does not go nearly as well with pizza.
-Dave Barry-


I feel sorry for people who don't drink. When they wake up in the morning, that's as good as they're going to feel all day.
-Frank Sinatra-
Of course I also like Dave Barry and Frank Sinatra.

Checking the old log book, I was 161 lbs in 2010 at this time of year, and 167 lbs in 2011. So I'm on track. If I can stay healthy, it should be a good year of kicking ass.
I just got off the treadmill after 15 miles and 2-1/2 hours. I watched "Tremors" and started to watch "Tremors II". I stunk of B.O. when I came upstairs and the girls let me know it. All I could think of was what my Grampa used to say. "If you're going to invite a dog to dinner, he's going to shit on the carpet". But I think he was probably talking about Madonna's halftime show at the Superbowl. Zing! Just kidding!
Great quotes from "Tremors"....

Valentine McKee:(Kevin Bacon to Fred Ward) I can't believe we said no to free beer!

Valentine McKee:(Kevin Bacon) What the hell's in those things, Burt?
Burt Gummer:(The Dad from "Family Ties" as he drops home made pipe bombs on the giant worms)   "Just a  few common household chemicals in the proper proportions. "
So true.

Anyhow, here are some photos from the paleo/non-paleo feast. Grass fed beef burgers fried in butter, served with fresh toppings including blue cheese and bacon.The bad stuff was copious amounts of beer, buns and French fries. And desserts coming out the wazoo.
First things first. Here's how to make perfect French fries. First, bring the peanut oil up to 280˚F. Lard is better, duck fat the best! But too costly!

So you have to remove the fries from the ice water, then gather enough for your first load. Nuke them in the microwave for 3 minutes so they don't cool the oil off too much. Cook them @ 280˚F for 6-8 minutes. remove them and drain the fries. I know they're not done ! Then repeat with the rest of the fries. Now that the fries are "parboiled", crank the oil up to 375˚F and finish them off for 3 minutes. Toss with salt. They will be awesome.


I'm no expert, but I'd say this is a young female. Pretty magnificent bird, she was only about 10 feet away and looked about  2 feet tall. In the USA, they call them "Chicken Hawks", even though they don't usually eat chickens.
Anyhoo, we Pylons have a 4 hour training run up on the Bruce Trail on Sunday, my longest one so far this year. It's gonna hurt. Looks like I picked the wrong week to give up beer.................
Posted by Digger at 5:19 PM