Digger Goes to P.E.I. I'm Not a Professional Food Critic, But I Watch Iron Chef.

Quick nasty restaurant review, The Claddagh Oyster House in Charlottetown, P.E.I.
I had some time to update the blog, and I was so pissed off with my dinner tonight that this is it for now. My daughter  and I are touring Prince Edward Island, and I will post later on the who,what, where, when and why, photos etc. We are having a great time, lots of good people and good eats.
Tonight we had dinner at the above mentioned Claddagh Oyster House.  The Girl had the  lobster gnocchi and said it was quite good. I had the bouillabaisse, and it was frickin' awful. I couldn't finish it, which is unbelievable for me, considering I hadn't eaten much all day and normally can really pack it away. Usually I love "Fish Stew".
This however, tasted like the broth was just the water that the chef had boiled the potatoes in. I'm also  pretty sure he just threw all the ingredients in together with the spuds, which resulted in rubberized lobster and tasteless clams and mussels.The potatoes overwhelmed the whole dish, and if there were any spices used, I didn't taste them. As we say after a bad meal at the fire hall, "I wish I was a dog, so I cold lick my ass and get this taste out of my mouth". 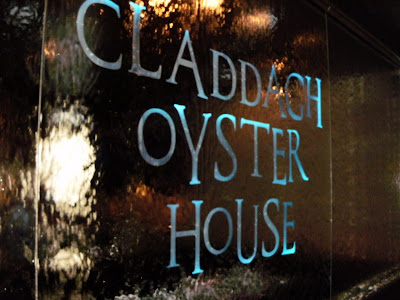 Luckily for the chef and server,  I was with "The Girl". I asked her if she would be embarrassed if I told our waitress how disgusted I was with this "gruel" and she said she certainly would be, and didn't want me complaining. The server never asked me the traditional"How's everything", I think she was getting my stink-eye vibe. I will avoid this restaurant from now until  the day I die, and will tell my friends and family to do likewise.

Also, I had to add ice to the near room temperature beer that eventually arrived from the bar upstairs. Where do they think we are? Swindon?
So there. The only bad meal we had in PEI, and it was the most expensive. One beer, one ice tea, 4 oysters, gnocchi and gruel, $106.00. And that's Canadian Dollars.  Doh.
About an hour later I was hungry for a burger. Double Doh.
Otherwise, we are having a great time, the weather has been spectacular, the people are as friendly as we remember. More to come.
Posted by Digger at 9:41 PM