They say you always remember your first, and I won't soon be forgetting Ironman Canada 2010. I definitely underestimated how difficult it was going to be, strange as that sounds. After having pretty good success with the half-ironman distance and considering a marathon to be a training run, I figured I had this one dialed in. What could go wrong?
The Swim
The swim was fantastic. Almost 3,000 swimmers and a huge crowd starting us off.


There sure were a lot of people, and there was a lot of contact for the whole swim.Very hard to find any open water,but that was OK, it is what it is. As usual, the swim comes to an end too soon, as I always find it the most relaxing part of a triathlon.Also, I know the pain of the bike will follow.One cool thing was the scuba divers underneath you at the turnarounds. A 66 year old man died last year 100 meters from the shore at about 8:45 a.m. His two sons completed the race for him this year, one did the bike, the other the run.They even got an official time. 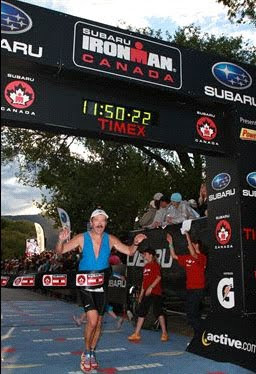 The lovely volunteer in the above photo was checking me to make sure I was medically OK. I told her I was ready for more. I would be barely able to move in about 10 minutes.
As you can see, after cleaning my face with sponges for 26 miles, my cut isn't as bad as I thought it was going to be. Nothing left now but a bit of road rash. I was hoping for some stitches or at least a black eye.
Jay (in the above photo) flew into Kelowna from Connecticut (Via Toronto) and only brought his debit card with him. Unfortunately, since he is from the U.S., they wouldn't allow him to rent a car with a debit card, not sure why.So he took a bus from Kelowna to Penticton,about 60 km. Luckily, he didn't have to worry about carrying luggage, since the airline lost his.When I went to pick up my bike from the bike transport guy, I noticed Jay had on a Bristol Fire Department golf shirt. I thought it was Bristol England, but when I said "Hi" to him, I noticed the lack of an accent and said, "Hey,you're not from England!"Anyhow, we get talking and turns out we have done a few of the same trail runs, Escarpment in New York, maybe Nipmuck in Connecticut, my memory.......eventually he tells me his story. So he's got no car , at least his luggage showed up on Saturday so he's ready to go, except he is going have to walk from the hotel to the race on Sunday. I would have said "Screw it!" a while ago, but Jay is determined to say the least. Mrs. Portage and I tell him forget that, we will pick you up at 5:45 am Sunday, and we do.
Congratulations to Jay, who not only raced, but hammered the bike and run and finished in 11:12 on the nosey.
Mrs. Portage had more faith in me than I did, she had made dinner reservations for 7:45p.m. By the time I had gathered up all my stuff and retrieved my bike, it was 7:45 p.m.Also, I was more shuffling than walking. Dinner wound up being Chinese food and beer in bed back at the hotel. Man, it was good.  It only hurts when I move or don't move.Not sure if it's from the crash or the exertion.

Personally, I have packed away the swim and bike stuff, no more Ironman until I'm 55, and then it will probably be in St. George Utah.
Right now, I've got a Honey-Do list that's been neglected for a while. Better get at it.
Next up-Vulturebait 50K in October.
Posted by Digger at 12:27 PM