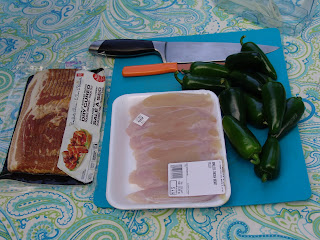 This recipe was kind of stolen from Mark's Daily Apple. Here's the stuff. Just jalepenos, chicken fillets and bacon. What's not to like? One is enough.Totally primal, just don't make any plans for the next day that involve being more than 100 yards from a bathroom. 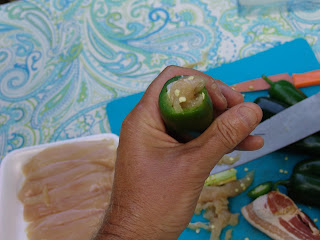 Cut the end off the pepper and stuff it full of chicken, then 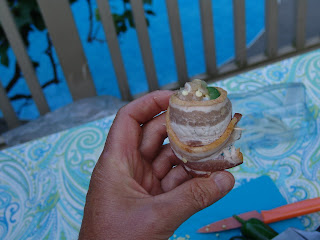 wrap that rascal in bacon and secure the entire mess with a tooth pick. 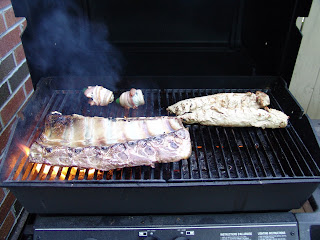 We had a rack of Bronto Ribs and some pork tendergroin cooking away already, but here, we begin to add the chicken stuffed jalepenos wrapped in bacon, (or csjwib's) 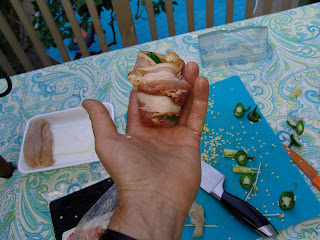 It's the "Double Down" of stuffed jalepenos, I wrapped two slices of bacon around this bad boy. I think the jalepeno looks like a little baby, all swaddled up in bacon. 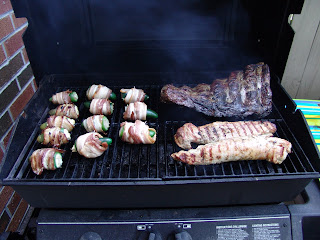 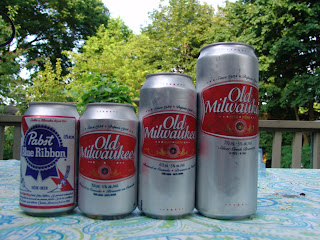 Beverage of choice? With this one, I've got to choose the ....biggest one! 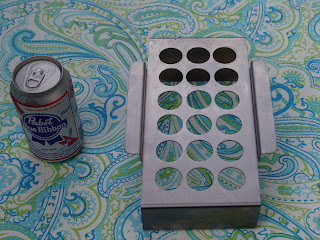 What you see here is a jalepeno roaster for the barbeque. Unfortunately, the bacon wrapping precluded me from using it today, they wouldn't fit in the holes. 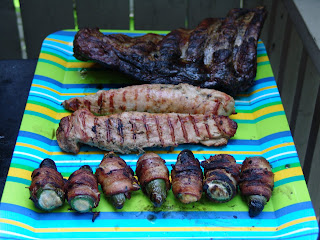 So here we go, Bronto Ribs, pork tendergroin and seven csjwib's. The boy and his crew ate the first five, then came up for ice cream and anything cold! There's the "Double Wrapped" second from the right. I just ate it. Wow.
Posted by Digger at 10:03 PM