Oh Yes We Did! Digger & "The Boy" Home Cook "The Bacon Explosion". 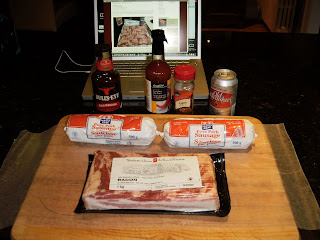 Ever since I saw the "Bacon Explosion" BBQ Addicts , I knew I would make one. Well,since Mrs. Digger has joined me on my primal diet, what better occasion than Mother's Day to prepare this tasty dish. So I enlisted Chef Extraordinaire, aka"The Boy"aka "The Big Guy", to help me create this masterpiece. Only problem, it's like winter outside, so we did oven roasted bacon explosion, instead of BBQ'd. If it's a hit, we'll do it on the BBQ once it warms up. But it was snowing a bit here today!
OK. Here's the ingredient list. 2.2lbs thick sliced bacon. 2lbs. sausage meat. 4 tbsp's BBQ sauce, hot sauce, Cajun spice rub, Old Milwaukee. The boy put the recipe on his laptop and we were off to the races. 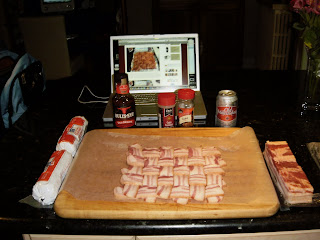 The Boy did the weave with bacon, it was a thing of beauty. I had to call his mom (the artist) in from the garden to have a look.Note- the picture on The Boy's laptop is going to follow our progress as we follow the BBQ Addict's recipe. 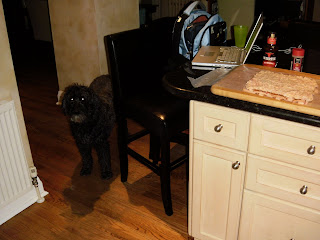 We had a very interested family member, Coal the Wonder-hound  kept a close eye on us, in case some bacon fell on the floor. 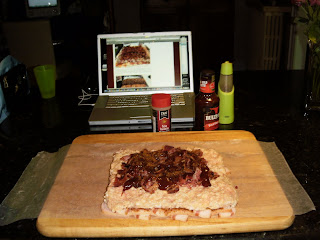 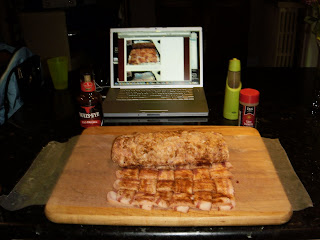 So spread the sausage meat, crumble the remaining bacon,more Cajun spice and roll it back on itself like you were making sushi. 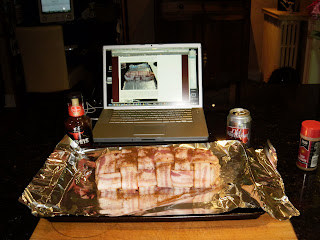 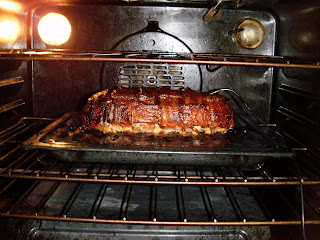 How does that look? Not too shabby! 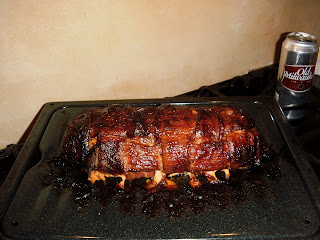 And we are done. How good does that look?Total cost? $10.00, and the nutritional breakdown is awe inspiring as far as our Paleo Diet goes. I make it out to be six servings, each serving has 600-800 or so calories.You would have a tough time eating two pieces.

Now, I don't know how the cup or so of bacon/pork fat grease that drained out while were cooking it affects the calorie count. I'm sure a cup of meaty, greasy goodness has a few hundred calories, I know 100 grams of bacon grease has almost 900 calories. I can say there was quite a lot of, um, ah, shrinkage.
We won't count that bacon grease that drained out in our calorie count, we will however reserve it to fry veggies in later.
If you believed in conventional wisdom, you would probably think th "Bacon Explosion" would be bad for you. But of course, we don't believe in conventional wisdom here at Digger's Paleo Life! 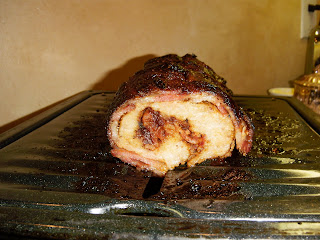 So, this is what it looks like from the inside. Deeeeeeliscious and filling is how it tastes. Notes to self.
1) Don't add salt (duh). Doesn't need it.
2)Do add more hot stuff. Maybe some jalapeno's.Spice up the sausage meat a bit.
3)The carbs are all due to the sugary BBQ sauce. Find a low carb BBQ sauce.
4)Use thin bacon if doing it in the oven.Thick is probably better for the BBQ.

Many thanks to The Boy for his assistance! As we all know, bacon is "meat candy". An awesome Mother's Day treat for Mrs. Digger.
Next up, "The Home Made KFC Quadruple Down" 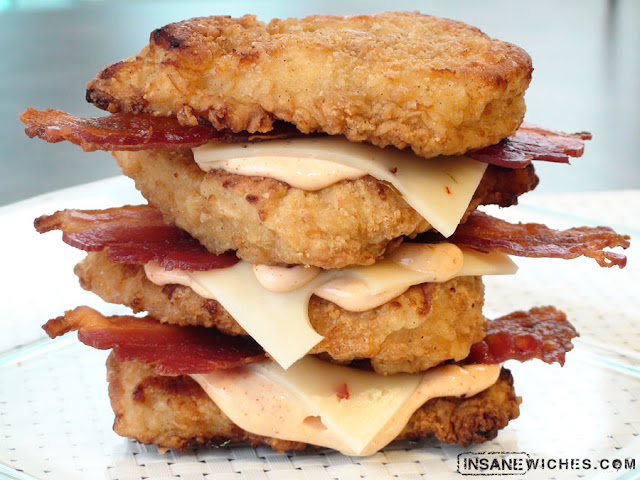