Seaton Trail 52K- I love It When a Plan comes Together 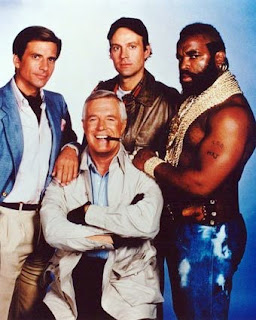 
Anyhow, time for the slide show. 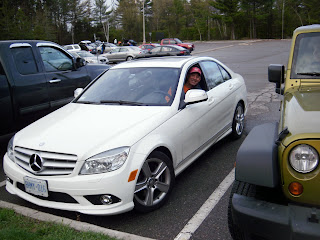 Swiss arrives in style via the Pimpcedes.Where's Dora?How does this guy afford this car after paying for two weddings in the last year? Inquiring minds want to know. When Swiss left home for this race, there was a blizzard going on. 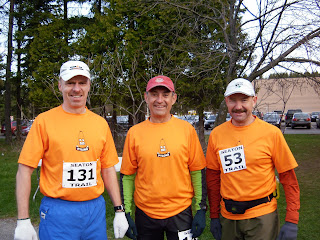 Looooking gooood!. Where the women at? 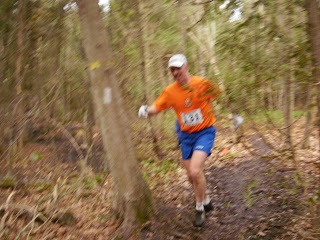 Captain flies by at a high rate of speed thus wrecking  the photograph. 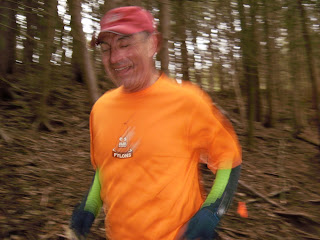 Swiss does the same thing. Action Photo! It looks like he has skinny green arms, but he doesn't. They are very big, tanned and hairy. Like a Sasquatch,sorta. 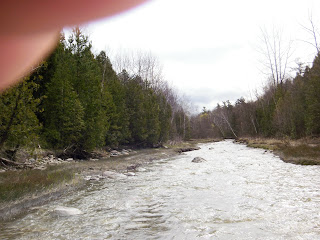 Great shot of my thumb while I stand in the middle of a river crossing. Volunteers on the bank thought I was maybe retarded. They might be on to something. 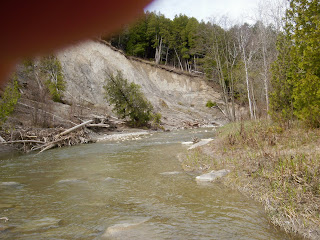 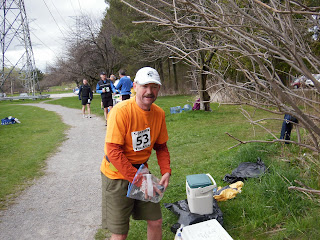 Whadda Ya mean these are your Vespas Captain? I swear I brought them. Anyhow, that's me at the 26k turn. 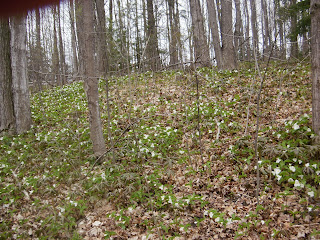 A field of trilliams! Awwwwwwwwwwwww, I should come back later and steal some of these for the garden.


The photo below is a hill, or at least what the FAP's would have called a hill a couple of years ago. The FAP's say,after Moab, Escarpment,etc.  that this doesn't count as a hill any more! 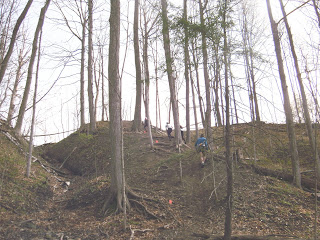 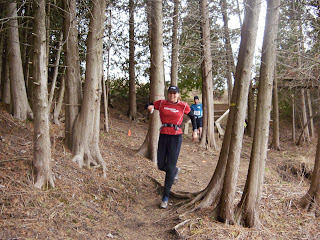 Here's a shot(above) I took of Laurie McGrath, the 50 mile winner. I pulled over and pulled out the camera, and she yelled "What are you doing? It's a race!"
Captain's time, I believe was 2:36 for the 26k, and Swiss was definitely under 3:00. I'm not sure of his exact time, I will update ASAP.(Whoops, looks like Swiss followed someone he shouldn't have and went off course on the way back, finished just over 3 hours). Stoopid Seaton Trail with no stoopid 60+ age category for Swiss. And no 50+ for the Captain and me.Why should we have to compete with kids in their mid to late 40's? Seaton Trail Mudpuppies Unfair to Old People!!! (Just kidding, great race,many thanks to the RD's and all the volunteers). The shirts were actually pretty good this year, and the medals were shaped like dogs.which is nice.
Next up for me is a sub 40 minute 10k on May 2nd. It's in the bag. What could possibly go wrong?
Posted by Digger at 4:41 PM