FAP Slush Run Under the Stars

So we had the "monthly" Fat Ass Pylon run last night on the Don Ravine Trails.Unfortunately, or fortunately, depending on how you look at it, the mild day had turned the snow to slush and made the run a six mile slog through an ice cold river. Some of the ponding we ran through was almost knee deep. Captain,Phantom and I headed off for the hills loop,  Graham and Sub stayed on the flats. Bad move, as the flats were where all the runoff wound up.
At the end of the night, it turned out to be a great run. Just over an hour,maybe 7 miles total. No one got hurt. Later on, Moonshot and Ladies man dropped by and joined us for chili, Caesar salad, french bread, Mrs. Digger's brownies, chocolate almonds, Neapolitan ice cream and beer. No sign of Beaver or Pointer, even though they only live 5 minutes away.
I found a wine called "Stump Jump" from Australia, which also happens to be the name of one of Captain's favourite trail 50k's in Tennessee.Thanks to Graham,who is also from Australia, for explaining that a "Stump Jump" is a type of farmer's plough that can pass over stumps without breaking the blade. In Tennessee, a "Stump Jump" is when you have to jump over a stump.
Anyhow, the Captain decided it was time for some new FAP (Fat Ass Pylons, the name of our running group) apparel. Singlets, poseur shirts etc.We found out that our team anacronym, FAP,is now internet speak for something very funny. Check it out here.

We decided to stick with FAP's, Moonshot said it was better than "A Bunch of F*c#in' Wankers. Here's a shot of the moon, after the run. 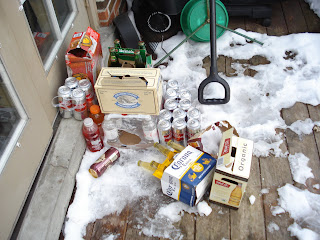