Well I am now up to 56K running in January, and starting to feel stronger out there. We even fit in a bike ride and a couple of swims. I have a couple of new routes, I used Map My Run to see the elevation and distance.Ignore the times, I start the thing up and then remember something I forgot and don't start running for a while. Mostly I'm running 5:30-6minute K's, can't push it just yet.

Some observations from our 2+ months out here on the "Left Coast". I always thought this was where all the Hippies retired, but I was wrong. There are old Hippies here, but they seem to be on the smaller surounding "Gulf Islands", such as Saltspring and Hornby Islands.
Other things;
People here are really friendly, even the people who work in the stores and restaurants. Even the people at the Post Office.That still surprises us. Kinda like being in Tennessee, without the accents.
A lot of people here burn their garbage. The whole household garbage/recycling shtick is so convoluted that people here just burn stuff. Especially "Up Island", which is anywhere north of Victoria.
Nobody picks up their dog's poop. It is everywhere. Watch your step! In fairness, they do let their dogs drive them home from parties.
People here say "Hey", instead of the standard Canadian "Eh". i.e.-"It's pretty cold out, hey"?
Drugstores here are huge and you can buy anything in them.They're like a Best Buy,Shoppers Drug Mart and Zellers rolled into one.
It's been 6˚C almost every day this month.That's pretty normal for January. 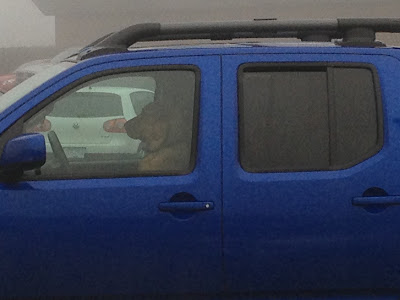 Soooooo, two good weeks of running, we are definitely looking for some races on the Island, but it looks like me might hafta hit the mainland for an Ultra. Gary Robbins has one in Squamish.  He just set a course record at the 100 mile H.U.R.T. in Hawaii, and he's from Newfoundland. Hey, maybe Ellie Greenwood and Tracy Garneau will be there?I know someone famous who will be running, Dora, who was recently featured in Canadian Running Magazine because of her strange "Caveman" diet.Pages 62-63.
Or maybe I should just try to get to February without hurting myself.