I have a nice 10.6 K loop I do in the Mt. Pleasant Cemetery when the ravine is to snowed in or too muddy. They keep the roads runnable, even during a heavy snowfall. The best thing about it is you aren't on a treadmill. The worst thing about it is you're on a road. At least it's outdoors. I can wear my iPod, since I don't have to worry about getting hit by mountain bikes or being attacked by unleashed aggressive dogs.

The cemetery is world famous for it's huge variety of trees. Also, many formerly rich and powerful people are buried there,like the Eatons, the Westons,and now the Thomsons. Medical pioneers Frederick Banting and Charles Best, (co-discoverers of insulin) sports stars like Charlie Conacher, Foster Hewitt,Punch Imlach and many more. And lots of the best kind of politicians.You can read all about them here if you are really bored someday. But seriously, it's pretty interesting if you spend a lot of time in there.
The cemetery run is not a bad plan "B". I always enjoy making clever puns out of some of the funny names you see on the tombstones.


Now here are 3 sad stories I pass by on my run.The first one is "The Children's Garden". I can't imagine losing a child, and there is a section reserved for them.

Sad story # 2. Neil Peart is the drummer for the world famous Canadian band "Rush."  In 1997 his 19 year old daughter died in a car crash. Ten months later, his wife died of Cancer.

The detail is amazing, it has a glass prism on top.


Next up, we have the sad monument of a young mother (who was also a psychiatrist) who jumped in front of a subway train with her 6 Month Old baby in her arms. Here's the story. 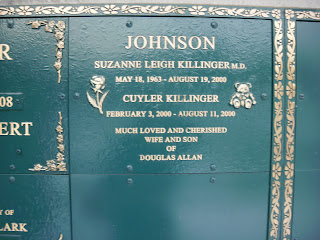 And now for the ridiculous. Steve Stavro owned a grocery store and did very well for himself, eventually being able to afford to buy the Toronto Maple Leafs Hockey Team. Steve was Macedonian, and I guess he fancied himself as a modern day Alexander the Great. Here's his humble monument. Alexander the Great conquered the world, Mr. Stavros, not so much. But you can't take it with you, so why not?


So I leave the Cemetery after the roughly 8 K loop, then it's sprint past the Captain's house (slow down once out of view), over to the dry cleaners. past the fire hall, around the corner and hammer time for the last 500 meter sprint.

Total Distance-10.6K  Lots of hills.I try and do this tempo run once or twice per week.

Next Up- The Beer & Beef Curling Bonspeil doesn't go so well.
Posted by Digger at 1:53 PM