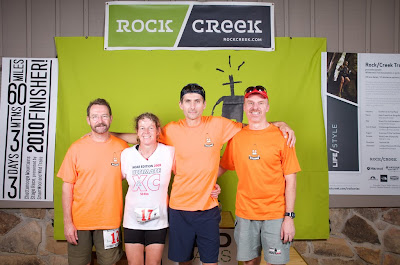 So here's the crew after the Tennessee stage run.That was fun, but it's time to move on.I have Ironman Canada coming up as my next major race, and today was bike/run day.
The Tour de France was on at 8:30 a.m.this morning and I had the brilliant idea of setting up the trainer and hammering stage 7 on the bike with the boys on the "Tour" while I watched them on T.V. So, by the time I got the kid's breakfast and had the basement properly set up, Lance and the boys are already well into the stage. Only an hour and a half to go, so, like an idiot, I hammer it for 1:30. I wrapped the bike and trainer with towels, and had 2 gallons of ice water to drink. Still, the towels and carpet got soaked, I was sweating like crazy and the basement started to smell like a old jockstrap. Finally the end came and I was dead tired, but it was good!
So,Caveman that I am, I had a quick swim and ate 4 eggs, drove The Girl to work, then came home and changed into my running gear for a 1:20 loop. It is now about 2:00p.m. Two 20 oz. water bottles, and I'm out the door headed to the ravine. It's the peak temperature of the day, right around 100˚F with the humidex,but hey, I was just in Tennessee.
I remember the 10 minute road run to the ravine being very hot, and finishing my first bottle of water after 20 minutes.I guess I started feeling dizzy after about 30 minutes. I stopped running fast after 50 minutes when I drained my 2nd bottle, still 20 minutes from home and feeling like I had to puke. I slowed to a walk and started breathing deeply, trying not to faint. I began to feel a little better, but was still concerned about getting home without ambulance assistance. Long story short, I took a shortcut up the hundred stairs, found a water tap near the Leaside arena and soaked my head and filled my bottles. I was now about 10 minutes from home. Walking around the last corner with about 100 yards to go, I saw some people I know so I broke into a run before they saw me. What a phony!
I didn't go right into the pool as I still felt like passing out and feared drowning.
I guess I bonked, but it could have been the heat. I had eaten no carbs all day, and a gel or two might have helped. When I stepped on the scale, I had lost 3 lbs. on the run.
Bike very good, run very bad. Live and learn at age 52, I guess.
Day off tomorrow.
Posted by Digger at 9:26 PM